I resigned from all of my adjunct teaching positions this week. That’s not entirely true. I informed one music department I was leaving during the Spring semester. Reflecting upon my mental, emotional, physical, and financial well-being, I concluded that resigning from all teaching made the most sense.

Between three universities, teaching a combined 170 students per semester (about 340 students per year), I earned $31,000 annually. That’s total. Not at each university. Total. I taught a full-time professor load, clocking 60-70 hour weeks, especially during the pandemic. Without a TA.

At this point, if I were discussing this on social media, several adjunct professors would chime in to tell me how good I had it or how much more teaching they were doing for even less pay and more hours, as if this were a badge of honor, martyrdom or looked better on their curriculum vitae.

It’s the pandemic, isn’t it?

Sure, that’s a contributing factor, but not all.

To be fair, all of my colleagues pivoted – immediately, brilliantly! - to a primarily online format. Although, one university required me to teach both in-person and online, to include recorded lectures. (double the work, same paycheck)

I’ve spent about ten years teaching in higher education. It doesn’t seem like much until you factor that I also worked eight years as military musician in a top Army band and seven years as a dedicated stay-at-home mother, raising two sets of twins and building back a performance career. That’s 25 years of work. Factor in an additional two years of working in the business sector in NYC (1994-1996), while taking and winning auditions, to include earning a debut recital in Weill Hall (in Carnegie Hall) and the West Point Band position.

Reflecting upon the many transitions and disappointments I’ve experienced through the years is helping me through this period. My spouse commented that he’s seen me get knocked down and get up many times. A blog entry about my experience of leaving a full-time performing career to raise children is a separate “TED talk” …

At age thirty-nine, I re-auditioned for my previous position in the West Point Band, but the skill gods were not with me that day and I didn’t even advance to the second round. At the time, a bitter pill to swallow, but I reassessed my skills, dedicated myself to improving my saxophone performance and opened a piano studio. So, with everything else I juggled, I ran a successful piano studio for ten years, teaching close to 100 students.

It felt good! I felt proud and validated.

For ten years I’ve mainly taught Global Music studies (call it what you want: World Music Cultures, World Music Pedagogy, Intro to Ethnomusicology, Anthropology through Music, teaching students to care about people and cultures by teaching them thoroughly and lovingly all that we share musically). Eventually I taught other courses, such as a standard music appreciation course. Heck – a few schools even hired me to teach saxophone! (I mean...it is what I do...)

But these classroom courses – large General Education classes – these are the money-makers and the diplomacy builders. Why should someone care about people? Care about music or musicians/artists? Attend concerts or financially support your orchestra/ensemble/arts organization? Because they took courses like mine and had a teacher who included them rather than excluded or supported long-held elitist views. My course designs were through a social justice lens – long before school administrations mentioned diversity, equity and inclusion (DEI).

What my students didn’t know is that their tuition costs were barely paying me and other adjunct instructors. When I occasionally told students, they were shocked.

It is true that I don’t have a PhD or a DMA (Doctor of Musical Arts). There are many teachers with a PhD or DMA who work in adjunct positions; conversely there are full-time professors and full-time contingency faculty who only have a Masters. What I do have is a CV that demonstrates years of experience – in fieldwork and research, continuing education, certifications, professional memberships, applied pedagogy and performance. This is a feat not necessarily achieved by those who teach in a classroom and applied instrumental studies, as well as maintain a performance schedule. Almost all of this was achieved without financial support from any of the institutions at which I taught.

Let me be clear: my dissatisfaction is not merely financial.

Being an adjunct is a lonely existence. Racing from school to school, with no office and no time to foster connections. My dissatisfaction is also in the inability to be fully involved, invested, included and compensated - to be a voice for change in curriculum – especially in areas of DEI.

and how diverse, equitable and inclusionary is your institution’s practices in regards to faculty…?

None of the colleges where I taught require global music studies of music majors or minors. It is offered as an elective. In a twenty-first century curriculum landscape, this cannot be an elective. Additionally, it was my experience that the students with no musical background did far better in my courses and were more successful listeners and observers than their music-student colleagues. Is this because as an elective, the course communicated to music students that it’s not important, or have we already trained impressionable young music students to be less accepting of non-western music?

My money is on both.

The answer lies in decolonizing and diversifying curriculum - even long before college - but this can’t happen if you are exploiting your faculty, and/or not listening to them.

I took a quick review of what I accomplished over the last few years, to include the last 16 months during the pandemic. It includes:

(My thanks to Kyaw-Kyaw Naing and Dr. Alex Peh for including me in this ensemble and allowing me the opportunity to learn this Burmese music tradition and share my experience with others)

**Ask your music major students if they are truly familiar with some of these composers. I have. They aren’t. Ask yourself if your standard general ed. music appreciation looks like this.

This partial list doesn’t include professional committees on which I have served. It doesn’t address the many professional saxophone performances I have presented or the fact that I finished graduate school while teaching at several universities.

I scoffed last month at doing unpaid labor this summer for an academic initiative; an initiative in which I believed but knew I wouldn’t be compensated. I was told that as an adjunct, if I wanted to get ahead I would need applied pedagogical practice on my CV. I’m pretty sure I have that…

I love teaching, and I’m a great teacher. Would I love to teach full time? Of course! I’d be thrilled to teach saxophone, use my other skills in adjacent topics and be paid a livable salary.

Someone very dear to me said that I’m a truth teller and truth tellers make trouble (and sometimes get in trouble). I guess so. The Honorable John Lewis said to “make good trouble.”

I would have liked to have stayed, but perhaps my going will cause evaluation.

In my departure from one institution, I suggested I should be replaced with a full-time position, and that the new faculty hire should be BIPOC.

We should ask and demand change - even if it means the change doesn't benefit us.

What’s ahead? The path is unsure. My last blog entry (which was last summer, because – I’ve been busy!) discussed pivoting and assessing your skills – the tools in your tool box. I have many skills and tools; I'm hoping to find a job that pays more than I was previously earning, which will allow me to continue performing and teaching private lessons. I don't expect that job to be in music. As another dear colleague reminded me, there are many meaningful jobs that are not in music.

In the spirit of truth telling:

Check back soon
Once posts are published, you’ll see them here.

What's in Your Toolbox - Pandemic Edition 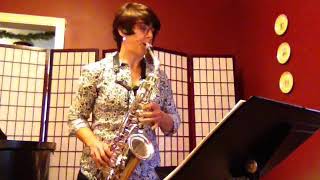 A blog from a blog